Chances are good that you've heard my voice before. For example in a documentary on television like on ZDF, 3sat, SWR, ARTE or RTL. You might know my voice from the radio - as station-voice on WDR4 - one of Germany's largest broadcasting stations. You could have heard my voice in nationwide radio spots. Or you know me from an audiobook or an audioguide...

But my references also include many satisfied small and medium-sized companies.

In addition, I regularly record German audiobooks, e-learnings, audio descriptions, texts for telephone hotlines... - well, in short: everything that can be written on a piece of paper or a screen.

Having a university degree in German language and literature, I am a real bookshop rat, and I often read literature live in readings.

As an experienced musician, I have a good sense of rhythm, sound and atmosphere of your productions.

I also have a university degree in English. Therefore I am often booked as an English voice talent for the international market. I speak a well-articulated Mid-Atlantic English - not too British and not too American, which is very well understood by non-native-speakers worldwide.

My recording studio is professionally equipped and optimized for state-of-the-art voice recordings to match the high standards of German broadcasting stations and production companies all over the world.

My studio garantees very fast turnaround-times of 24 hours or even same-day-delivery.

Via Musictaxi, Skype or SessionLink Pro we are connected within seconds all over the world. Some of my regular clients are in the USA, in Canada, Great Britain, France, Italy, Denmark, Sweden, the Netherlands, Russia and Poland. 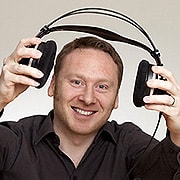